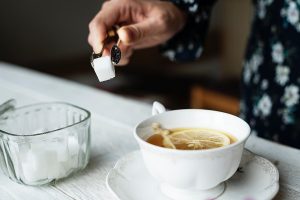 We all know the dangers of too much sugar and what it can do to our overall health, as well as the damage to our teeth but have we become scared of sugar?

Earlier this year there was a health piece from the Telegraph, which discussed the recent statistics that showed 170 youngsters had their decayed teeth removed in hospital every day between 2016 – 2017. This perceived “crisis” was a result of the NHS spending data showing the costs attributed to under 18’s within that time frame came in at over £36 million.

The sheer cost associated with just teeth extraction alone was enough to shock and to make us question whether we are at a tipping point as a nation, where it’s necessary to further label food and drink more clearly with specific sugar-based icons, such as a teaspoon to clearly identify the amount of sugar contained in a product (as opposed to the current traffic light percentage system which is in place now).

It’s easier said than done to reduce sugar intake and if you were to track each gram of sugar you ate every day, you could be surprised at how much you are consuming. It doesn’t just come in the form of sweets and treats, however, despite the bad press associated with sugar, it’s important to remember that healthy sugars and even regular sugar in foods isn’t a bad thing. It’s purely based on the level of consumption and as with everything, moderation is the key.

The real problem, when considering this recent crisis is the types of food and drink youngsters are consuming and how they are affecting their teeth. It’s common knowledge that sugary drinks such as orange juice, Coke and other fizzy drinks can have copious amounts of sugar in them. There can be up to 9 teaspoons of sugar in a bottle of coke and energy drinks in particular, contain a lot of sugar.

One particularly well-known energy drink on the market contains 27 grams of sugar, which is roughly around 7 teaspoons of sugar. This high level of sugar in something as simple as juice or pop drinks, that children can so easily consume sometimes in multiple quantities, is quite shocking and is a contributing factor to the problems we have now with tooth decay in children.

How Does Sugar Destroy Teeth?

Saliva helps to repair teeth and remineralise them when the bacteria in the mouth works with sugar to damage the enamel on your teeth. Unfortunately, too much sugar can overtake the remineralisation process and end up causing decay via the acid that’s created. These can also create cavities, or holes in your teeth which result in needing extraction if the damage is severe enough.

Clearly, we’re at a point now where youngsters (and adults) are consuming so much sugar in their diets that it is literally rotting their teeth at a faster rate and this is resulting in more extractions. As a dentist, we we have seen first hand the damage it can do to not only someone’s dental health but their overall health and physical state. Should products be labelled more clearly, specifically to target sugar content and to identify to the consumer just how much sugar is included?

There are so many foods which contain high levels of sugar but some of the key perpetrators of tooth decay include:

It’s clear from the evidence and the statistics available that our consumption of sugar has increased to a level where it’s having a serious impact on our children’s dental health. Sugar often takes a lot of the blame for dietary issues but it’s merely the quantities involved that cause the problems. So is the crisis real?

Yes but “crisis” may not be the right word. It’s avoidable with the right public messaging and education. Often, it’s other dietary issues that cause tooth decay, rather than pure “sweet greed” and this has to be managed too.

Whether we need more labelling to inform parents of the content of certain foods or whether we need more awareness publicly about the dangers of sugar on our teeth, the associated costs on the NHS could be enough to turn the tide and help improve things for the better, for both youngsters and adults. With dentists seeing the brunt of this problem more regularly and the long term effects it has, hopefully this potential “epidemic” can be contained.