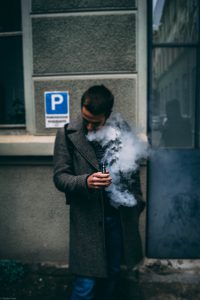 Although sugary foods and drinks are still one of the primary causes of tooth decay, there is a new danger which is threatening the dental health of many patients; Vaping.
In the UK alone, latest research from Mintel (sourced from https://www.dentistry.co.uk/2019/02/06/number-brits-vaping-keeps-growing/) shows that 18-24 year olds are most likely to start using Vape cigarettes and that middle aged people between 45-54 years old were vaping in 2018. This is a trend set to continue no doubt, with vaping becoming an acceptable alternative which is seen by many as a “safe” option to tobacco cigarettes. However, with testing still underway and no conclusive evidence to show that vaping doesn’t harm your health (and others health), it’s a dangerous proposition that in the next few years we could see an increase in vaping and with it, an increase in oral problems linked with vaping.

Should We Be Worried?

47% of smokers switched to e-cigarettes to help them quit, with vaping becoming an attractive offer, especially when considering that advertising has significantly reduced over the last few years for traditional cigarettes, with much of it banned or restricted. With hundreds of flavours and mixes available, do these concoctions have a negative effect on us or are they a good alternative to smoking? So with this switch over to e-cigarettes, should we be worried about them? And with so many questions still up in the air about their effects on our long-term health, it’s pertinent to ask about what effects they have on our teeth.

Vaping: Bad For Your Teeth?

There are negative effects from vaping and unfortunately they can damage your teeth and gums. From studies performed, it was shown that teeth exposed to e-cigarettes had more bacteria than those that weren’t and some of the known effects include:

Certainly, these side effects are bad enough but of course the big question is whether it’s actually worth the switch from tobacco cigarettes to vaping. Research is still showing inconclusive proof that it is better, only a slight improvement because of the absence of tar. The nicotine though is still harmful to health and these vape cigarettes are full of it. As part of the study, it was also shown that 55% of people thought vaping was addictive, presumably due to the flavours available but this breeds the question; is it also a gateway to smoking? even for those who never smoked before, as this becomes a trend and something that people are taking up almost as a hobby.

There is one particular issue that has concerned dentists since the uptake of e-cigarettes and that is that because of the absence of tar but the continuing presence of nictotine, this can fool people into thinking that all is well, specifically when it comes to gum disease. However, symptoms of gum disease show there is a problem but with vaping, because there is no tobacco but still a significant proportion of nicotine being inhaled, this can mask the symptoms. Usually your dentist can see if you have gum disease because your gums would be red or sore, with irritation and possible bleeding but because nicotine prevents swelling by reducing blood flow, this can hide gum disease symptoms from your dentist, causing problems later on.

Another result of increased or constant nicotine usage is grinding or “Bruxism” which can be intensified with nicotine if you already suffer from it. As it dries your mouth out and the surrounding tissue in your nose, throat and mouth, this can lead to “dry mouth syndrome” and result in halitosis and eventually tooth decay. Nictotine effectively reduces the production of saliva in your system and this can result in the aforementioned symptoms.

Vapour is certainly an alternative to tobacco and when considering it is removing a harmful substance, such as tar from attacking your lungs, then it is generally a good alternative. However, this does not mean it is a safe alternative and unfortunately, with marketing and the recent uptake in people using e-cigarettes there is a misconception that switching to vaping is a safe alternative. As we’ve seen described above, just because the smoke has gone, the nicotine still remains and this can cause just as much harm when consumed in constant, regular quantities. From reducing saliva in the system and causing hidden problems with gum disease, to accelerating grinding, dehydration and bacteria in the mouth, resulting in tooth decay and halitosis, vaping certainly has a long way to go before it can be considered safe.

The fact is that many of the chemicals used in vape cigarettes to create the flavours people crave, include acetone, ammonia and carbon monoxide which can affect your teeth but also cause lung cancer. They are carcinogens and they are being directly pumped into the body. Once the smoke has cleared hopefully regulators and extensive testing will reveal that people are actually no better off with e-cigarettes and the only solution is the hardest one: quit.